About Batumi
This is Georgia
Batumi is the second largest and a fastest developing city in Georgia. It is located on the coast of the Black Sea, at the Adjarian highlands, in the country's southwest. It is situated in a Subtropical Zone. That’s why Batumi is famous for its moderate winters and warm summers, palm trees and other subtropical plants and citrus plantations. Much of Batumi's economy revolves around tourism. Batumi attracts hundreds of thousands of tourists each year. It’s popular because of it’s marvelous nature, subtropical climate, fresh air from both mountains and sea, miles and miles of beaches, various entertainment venues, casinos, and bright nightlife.

Batumi won the prestigious award of the „World Travel Awards“ in 2019 and received the title of the fastest growing tourist destination. Also, Forbes put Batumi in the list of Best European Cities to Invest In for 2020.

With it's stable, business-friendly environment, association agreement with the EU, low taxes, excellent incentives for investors, liberal economic legislation, and strategic geographic location, it is no question why every major hotel chain on earth has made, or is currently developing, an investment in Batumi.
The country of hospitable people, ancient culture and traditions, unique folklore, pristine nature, moderate climate, delicious cuisine and wine, Georgia is becoming more and more popular among international travelers proved by YOY growth statistics and rankings. In 2019 Georgia hosted over 9.0 million visitors, while UNWTO nominated Georgia the fourth most dynamically growing tourism destination in the world. Alongside with tourism, construction sector is booming here as well with ever growing number of people wishing to invest in real estate. Located in the Caucasus region, on the coast of the Black Sea, Georgia is geographically well-positioned as a gateway between Europe and Asia. The country is perfectly situated for easy access to most major European, Central Asian and Middle Eastern markets and has free trade agreements (FTAs) with most of them. In this way, Georgia already boasts the majority of the preconditions required to become a regional ﬁnancial and business center. 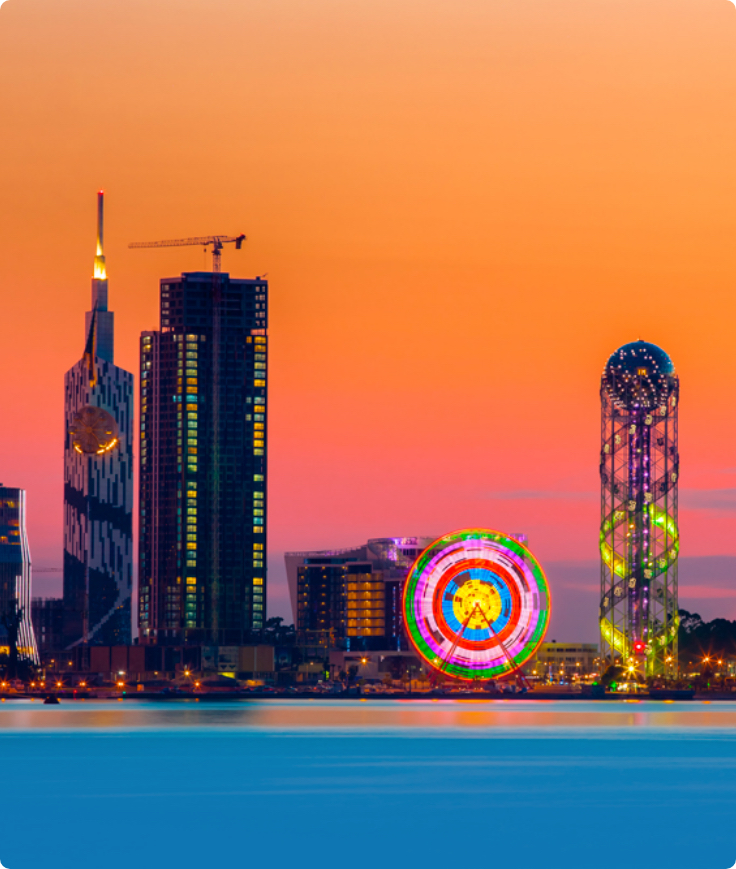 Every year a growing number — more than 2 million tourists gobatumi.com, 2019
One of the most in-demand travel cities on Airbnb 2019
"Europe's leading growing tourist direction" World Travel Award 2019
One of the safest tourist destinations in Europe is European Best Destinations 2020
Reasonable investment, up to 10% annual return TBC Capital 2019
7th place considering the simplicity of business production, Doing Business 2019
High degree of security, Numbeo 2020
One of the best European City to invest in, Forbs 2020